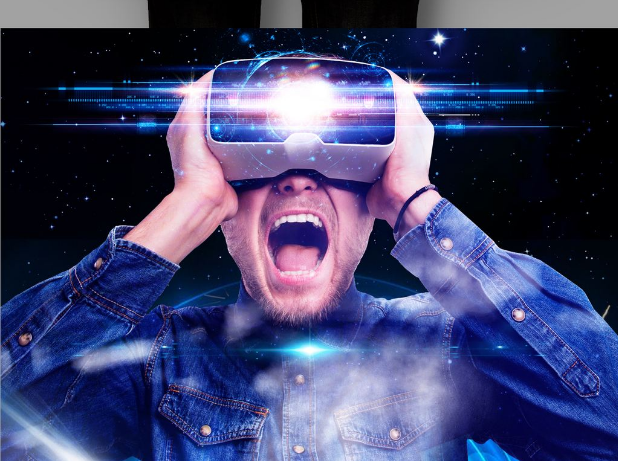 This tutorial will teach you to use the least cost and simplest solution homemade virtual reality VR wireless package, note that is wireless Oh!

First look at the video effect:

The videos are demonstrated separately:

VR glasses combined with mobile phone and empty mouse to achieve with the PC screen and head tracking synchronous rotation field of vision ;

VR game gun combined with wireless key-mouse to achieve the gun head pointing tracking and shooting and reloading and so on ;

VR Walker detection is more durable and reliable when installed on the side of the shoe and can adjust sensitivity to individual walking habits as well as the pace length in the corresponding VR scene. 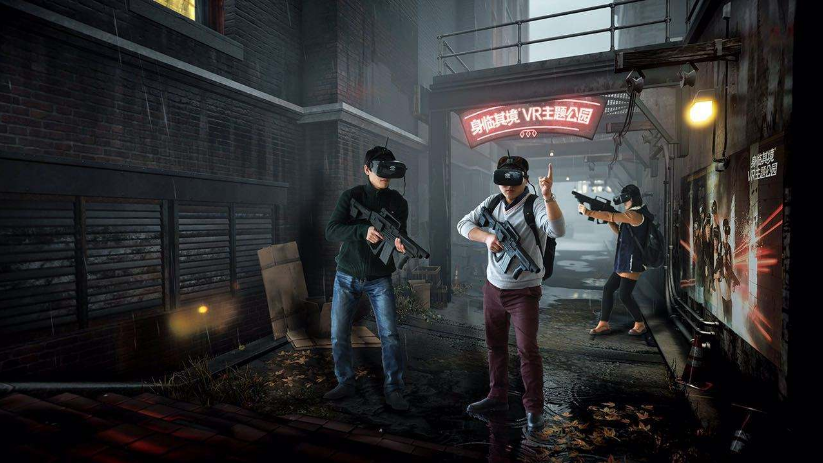 This video ends with a demonstration of the scene in the trial standalone game Isolated Crisis 2: the process of looking for ammunition boxes to reload and recharge after an initial encounter with the enemy... VR walkers can also be seen to be well aware of the ground and small steps.

1.VR glasses (similar to Google Cardboard glasses homemade only a few tens of dollars or less) modified to increase the air mouse (less than 30 yuan),

3.VR walker (self-made or buy dozens of yuan switch control four channels or more of the output of the hardware circuit and self-programming).

In addition to PCs and mobile phones, the complete set of equipment about two or three hundred yuan will allow you to get the first physical experience of virtual reality: a full eye 3D vision and synchronous changes with the rotation of the head; gun shooting consistent with the game and also by changing the pointing of the gun to change the perspective; walker detection of your walking state to control the virtual world of your forward / backward / take-off / take-off / squat......

Your body does not need to have any connection with the outside world... such as direct experience Cardboard's related APP (Google Play has) can also be omitted and the wireless mouse will be replaced with a mobile phone Bluetooth connected to the handle or keyboard and go to the virtual experience where..... space is the better the wireless range of PC-free!

1.the first is homemade Googlecardboard. This online search homemade cardboard can find a lot, here is a brief description of my personal quick homemade method:

1) First prepare the right lenses, this is a bit professional can look for telescope lenses to try or buy directly (there is a TB shop to engage in activities to send you can search).

Then need to use the mobile phone corresponding to the hard paper box, the lens (with plastic frame) cover in the box around the middle of the bottom position of each one and then along the frame circle trace hole, the distance between the two lenses.... personal practice is to close the box in front of the left eye can see the whole right lens and close the right eye can see all the left lens probably on it.

Fit the lens after the box cover in front of the nose position and then open a triangular hole in the bottom of the box to avoid pressing the nose, then use the phone to open the left and right format of the picture or video into the box cover initially fixed (plus some sea foam or double-sided adhesive is actually the phone's box size is basically appropriate to plug things clamp can be),the distance between the lid and the bottom of the box is moved before and after the box is closed (the lid of the case is now large and can be moved over a large area roughly even with the bottom of the box) until the glasses can be clearly seen through the lens when the image is marked on the side of the box,this is the box cover after the mobile phone to be fixed position, and finally with a strap plus limit strip plus sponge or something to play on their own... in fact, not as complicated as we think but to do to wear comfortable words have to work a little. 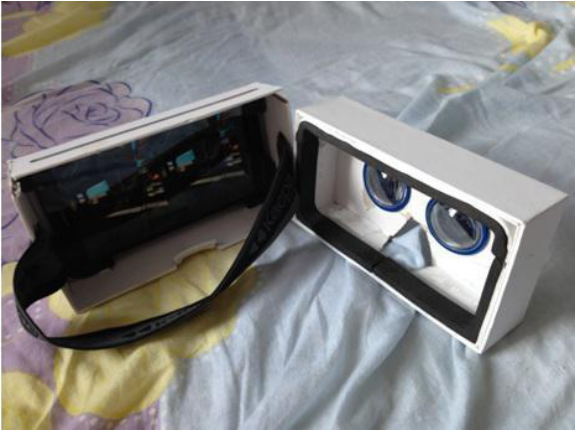 (A quick homemade cardboard finished product is shown below)

2.To achieve the effect of head tracking, originally wanted to use a mobile phone gyroscope directly, but currently there is no suitable mobile phone simulation mouse control software (tried many effects are not good and also occupy the mobile phone screen) can only stay. Here is the use of air mouse program, on Taobao to buy a 20-odd yuan empty mouse on it, and empirical results are good, in front of the video demonstration.I have tested and compared similar FreeTrack homemade headshot program, feel or empty mouse is relatively fast and effective, low cost, high sensitivity, 360 degrees rotation without dead angle, and in the effective wireless range can move freely control (FreeTrack those must be in front of the computer).The only drawback is that the 360-degree turn did not return to the original location of the scene well, that is, not accurate and biased, after all, this is only twenty yuan of the gyroscope of the air mouse, interested in trying a better or the rest of the wireless gyroscope program, but the cost will be high and self-made will be much more complex.

In fact, the deviation of the left and right turns has little effect on the player in the full field of view scene, because even if you need to turn more than 360 degrees to get back to where you are, you will not feel it, and the video from above shows that the orientation of my reload is basically the same; while the deviation of the head tilt will have some effect on the player, that the height of view may not coincide with the angle of the eyes and head.For example, head-up or head down to see the ground or the sky, which is mainly caused by the angle is too large and empty rats to keep up, you can increase the angle of the method of callback, such as a high field of vision and then look high can be resolved but this is very troublesome and very inconvenient, so I VR gun to solve the problem of high and low bias. 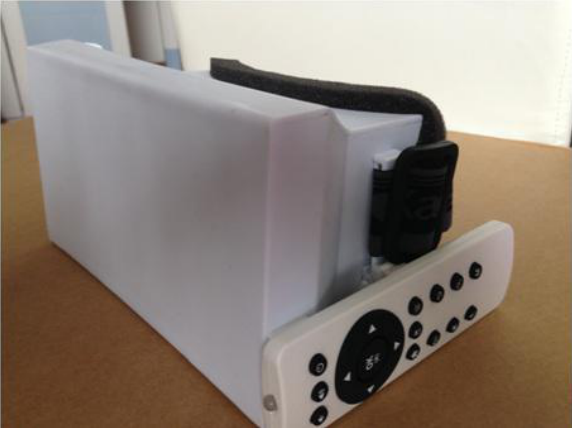 Because the VR gun is actually a modified aerial keypad (described in more detail in the next section) and can also control the field of view (shown in the video), swinging the VR gun head down (or up) immediately changes the field of view when it finds that the head-up view is low (or high).In addition, it is recommended to pay attention to the installation of empty mouse position, should try to let the original empty mouse's handheld position close to the neck, because the handheld empty mouse wrist is the center of rotation, and wearing VR glasses is the center of the neck rotation, so the closer the two should be better, I am in the VR glasses of the lower left side paste empty mouse, both near the neck and facilitate the use of the air mouse on the head can switch to open the game or temporary tracking (Windows, etc.).

The VR glasses with empty rats are shown below:

3.Finally say that mobile phones and computers with the screen, we should be most worried about the delay and clarity of the problem. 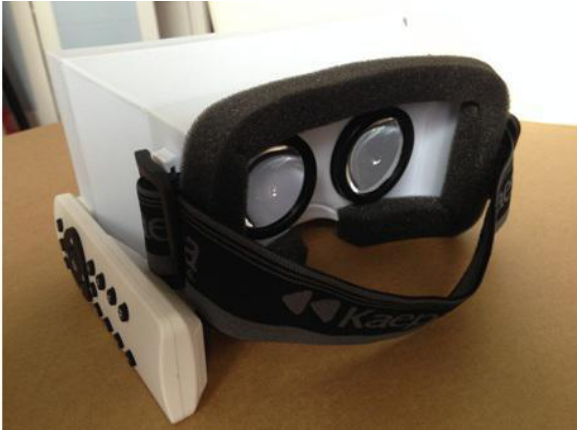 I use the same screen software is Splashtop feel good, the current version of the WiFi network is free to download, mobile phones and computers are installed separately after the e-mail registration can be used, it is easy to connect. The effect of the first said delay! After the actual test of the island crisis 2, I feel that the basic can be synchronized, do not feel the impact of the game experience (requirements of special rapid response to test PCellphone and PC-screen):

Video voice and display are the same mobile phone synchronization (computer has been muted), from the test results can also be seen. Because I am a single-handed control of the mouse so the video will sometimes feel the screen movement more stiff and tumble, this and mobile phones with the same screen computer delay has nothing to do. In addition, I have tested other remote control software such as the same screen, the effect can be better than Splashtop software, if you find the same screen.Say again sharpness, not perfect but acceptable, after all, is wireless synchronization, and the resolution of the phone screen also has a great relationship, I found that such as the use of 1280 * 720 mobile phone screen with the more difficult to identify the game inside the prompt text, and replaced by 1920 * 1080 mobile phone screen can be seen clearly.In addition because the lens edge blur problem also affects some parameters of the game interface prompt to see clearly, but the field of vision is not affected because you are in the game full field of vision can only move the head to see everywhere, this kind of edge blur problem if it is replaced by an OC game that kind of convex mirror black border interface to solve, I used VR glasses to see Oculusrift SDK or the key problems in the game frame. 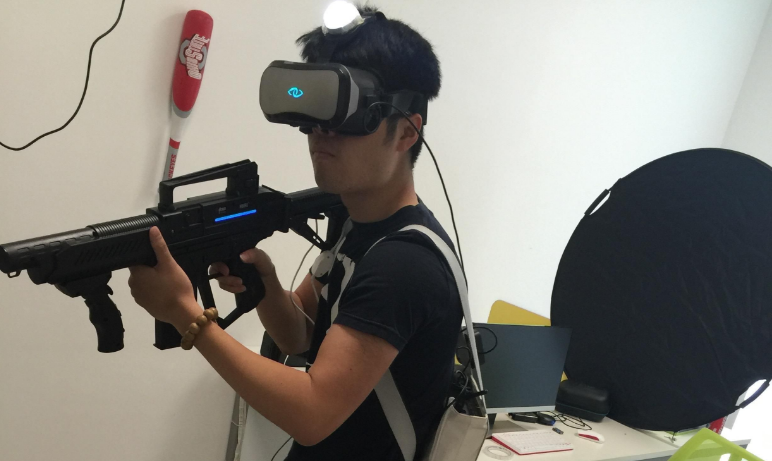 At the same time, the introduction of TriDef.3D this software, with it can be a lot of 2D games into the left and right format display on the computer, for us to use VR glasses mobile phone with the screen to play PC games is a great help, a lot of resources, because the original ecological output about the format of the PC games seem to be only "island crisis 2, 3" and "Avatar".I personally tested the "Ancient Scroll 5: Skyline", online games "War Front" can be used TriDef.3D into about the format used for mobile phone screen VR gaming experience, the following figure is about the format of these two games output and mobile phone screen effect..... wearing VR glasses with empty mice can feel the full field of 3D gaming experience.