Please tell the truth when you refuse me 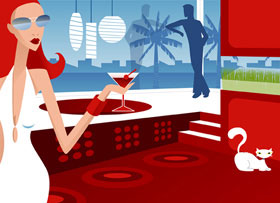 He was in his thirties, and for ten years, despite being a matchmaker many times, he never solved his personal problem. He attributed it to his lack of height.

He didn't complain much about it, but on many occasions girls who had no intention of continuing their relationship would still agree to one or two dates and then refuse.

Is this "polite" or "dishonest"? He is depressed, but still looks forward to the arrival of a true love...

Book a week in advance and confirm twice the same day; text me where I am before you walk into the cafe; walk up to me without putting down your coat and purse, and ask me first if I am Yezi -- a series of moves by Shen Li convinced me that he was a punctual, steady man with a little formality in his personality.

Sitting down to have a chat, Shen Li took a pile of materials from his purse and asked me to look over them. When I looked over, it turned out to be two talk pieces I had published at the end of 2004, in which the protagonist was a man. Seeing my somewhat puzzled expression, Shen Li smiled and said that he was a faithful reader of the morning paper. Today, he would like to use these two stories as a guide, combining his own emotional experience, and expounding his viewpoint of "gender communication, honesty first".

"Society is much more tolerant of women"

Let me first talk about her "changeable" I do not understand " (November 24, 2004 B11 version) this talk article, I have read several times, and see all the hero of the girl's deep love, such as pot chicken soup, on call, for her with others, lost their jobs, girls on these acts of peace, boys are still fighting in the middle of two wire. I did not understand her motives, but only for this infatuated boy. The next day, I watched carefully, and found that there was no serious criticism of the girl, which made me a little confused. In contrast to the other article in my hand, "I really don't want to hurt her" (December 28, 2004, B16), the gentleman who confided in her story told of his dilemma and expressed a desire to give up a woman who loved him (he did not love each other, but passively accepted her and courted her to love him, a woman who loved him). He only intended, and did not really like the girl in the previous article as long as the "two boats", but look at the next day's "across the river" bar, from all aspects of the saliva almost "drowned" this gentleman, almost 90% of readers think that the article's men are too florid, irresponsible...

I have to think that perhaps there is not a uniform standard of moral discipline for men and women in society. In a sense, there is obviously a lot more tolerance for women in many parts of society. To take another example, there is a popular TV show, "Meet Saturday", to the end of the program, the host asked male and female guests to choose their favorite opposite sex, female guests if the truth is: "I on the 1, 3 two male guests good impression." People do not think she is florid, it may be that some people think she is very frank, very cute. But I found an interesting phenomenon, male guests often do not dare so "Longwangshu", at the same time choose two female guests, why? Because it is easy to make people disgusted. In fact, it does not have anything to do with flowers. The male friend beside me has met the situation of "two choices" in his life, however he can't make up his mind, he certainly dare not say with one of the girls: "I like you, also like her, can you go out for some time at the same time?" For example, I know a small couple, the wife usually do not touch housework, children do not want to have children, resulting in family conflicts. I looked on coldly, can not understand this woman's behavior, since the choice of marriage, they have to do their duty, how can like her so "light"? I am not a male chauvinist, but also do not agree with this "big feminism" too much liberation, ah.

There are often female readers who, because of their own experiences, lament, " It's too hard to be a woman, and this society is too tolerant of men.So Shen Li's point of view is really new to me. I sat quietly in my seat and encouraged him to tell his story again.He was somewhat surprised and said, "I know I'm going to face a woman reporter today, ready for a heated debate, and I didn't expect you to listen to me patiently."

Why don't they tell the truth?

My own situation is a bit special, it does not mean family history, education or unit. I did not feel this before, but life let me understand this truth.

I worked in a foreign company, limited by my job, and had fewer opportunities to socialize with the opposite sex, so when I was old enough to fall in love, my warm-hearted friends played the role of "matchmaker" and introduced me to many girls.Nearly ten years later, I was still all alone. Usually at the first meeting, no more than 5% of the girls continued to associate with me, the reason, I also want to open, is the height of the problem. My so-called "special" also refers to their altitude.

In order to prove that I am not too extreme, I can tell a few things I have experienced. Once, a friend introduced a tall girl, she was 1.72 meters tall, only to see the first look I felt inappropriate with myself, the probability of success is minimal. But the girl didn't say "no", so I had to ask her out on a friend's introduction, so I offered to invite her to a concert, and she readily agreed. But that weekend, she let me in the concert hall at the gate of the "bath" for half an hour of cold wind, only belatedly, not an apology, only to tell me that she watched some TV. I did not how angry, after all, people came, prove that she still has a certain sincerity. Sitting in the elegant concert hall, she was so absent-minded that she had spent half an hour reclining on the back of her seat.At the end of the concert, as the crowd came out of the gate, I wanted to communicate with her the feeling of listening to music, but without expecting any reason from her, she said she was no longer seeing each other. It was very clear to me that she had rejected me because of her height; after all, we had not started a formal relationship, and we could only base ourselves on appearances; though I could accept that she had refused me because of her height, I thought, if so, why did she promise me to attend the concert? Did she feel that there was an appearance that made the refusal seem less abrupt?

Listening to Shen Li so firmly ascribe a girl's refusal to his height, I worry that he is too arbitrary, remind him that sexual intercourse is a complex art, whether men and women, love a person or reject a person, often have to consider the other side of the "software + hardware", that is, the comprehensive allocation of resources, can not only be based on a certain factor. Shaking his head, he said he trusted his instincts so much that, in his opinion, it was the height issue that caused the girls to light a "red light" at him.

I'll give you another example. Another girl was introduced to me. I didn't think I had much hope after the meeting, but the introducer encouraged us to continue. As a precaution, I asked the introducer to ask her about her attitude. After two days, the introducer replied that the girl did not want to draw a full stop and said that I should take the initiative as a man.Since she said so, I asked her out two or three days later, she came, but the attitude was similar to that of a girl, let me think she was perfunctory to me. One weekend morning, when we were supposed to go shopping, I called her home, and she seemed to have just got up and said nothing, and she said in a hurry, "Sorry, I have something to do!" Like a hot potato, she threw the receiver aside and never spoke to me again. Love wants you to love me, she rebuffed me, I feel normal, but this "rough" way of dealing with her but let me like a thorn in my throat. Why not use a better way? Do all girls think that this is the best way?!

The conversation shifted unconsciously from storytelling to perspective. As a spectator, I discovered that Shin likes to analyze issues from a gender perspective.

In fact, men and women certainly do not see the same point of view, is not there a book called "men from Mars, women from Venus" it? Take my love affair for example, probably 90% of the girls at the sight of me, the heart of the idea of rejection, but their reaction is the same, absolutely not to tell me frankly face to face Forget it, always reluctantly dating two or three times, to find an inexplicable reason, or do not say what reason to end hastily. I do not understand, tell the truth is not so difficult to this kind of a girl's tendency?

Been hit by more, I now have a strong psychological capacity, girls say what kind of reasons for rejection I feel normal. But here I would like to say in particular, sexual contacts, sincerity should come first. Love is a fair thing, men and women are equal, why not open communication? Remember I read an online post to the effect that a boy loves his classmate girl, always borrow a pencil from her, girls also know this tacit secret love, also often asked boys to give her pencil. Graduation boys went to another city, pluck up the courage to write a note to the girls: "I love you weigh 21 grams." Girls do not understand this sentence, think 21 grams of confession is too light enough to let her accept his heart, so the two can not form a companion. After many years, the girls watch a foreign film, only to find 21 grams of allusions from the West, representing the weight of the soul. Boys that year, the feelings of the fiery degree in fact as much as the "winter thunderstorm Xia Yuxue, it is dare with the king" ah. This post allows me to fully feel the sexual differences in love, despite this, I still look forward to finding a not tall people, I can understand the "21 grams" of the vindicated girl, in the same boat, sailed into the harbor of peace.

In fact, Shen Li also spent more than half an hour talking about his "zigzag" relationship with a girl, I can see that he likes her very much, and the other party in a sense not too honest with him. However, he repeatedly asked me not to write too much detail in the layout, which made me feel Shen Li extreme words under the kind heart. Walking to the bustling Nanjing Road West, breathing a breath of fresh air, I smile to Shen Li extremely sincerely, I hope he will find another half in the new year.