Test: Look at your ability to distinguish colors

Measure your ability to distinguish colors with the following set of pictures: 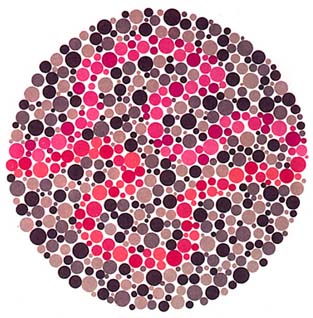 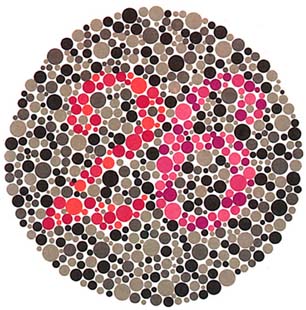 The following need to reply to seeColor blindness refers to the lack or total lack of ability to distinguish colors. Generally speaking, color blindness refers to red-green blindness. In the face of a colorful world, how do people perceive it? Originally in the human retina, there are three kinds of light-sensitive cells-cone cells, which have red, green and blue light-sensitive pigments.If a certain pigment is deficient, it will produce a sense of this color disorder, manifested as color blindness or color weak (color discrimination is weak). Color blindness is divided into many different types, only a primary color of the lack of discrimination, known as monochromatic blindness, such as red blindness, also known as the first color blindness, more common; green blindness, known as the second color blindness, less than the first blind.In theory, people with full color blindness should have only black and white eyes, but this is not the case. Interestingly, people who are red blind can still tell the red signal light. People who are green blind can also tell the green signal light. Why? This is because people who are single color blind can tell the three primary colors, but for composite colors such as orange and pale yellow can't tell them apart.Congenital color vision disorder is usually called color blindness, it can not distinguish a variety of colors in the natural spectrum or a certain color. The ability to distinguish color is weak, it and color blindness is generally difficult to strictly distinguish, but the degree of severity is different. Color blindness is divided into full color blindness and partial color blindness (red blind, green blind, blue-yellow, etc.), including full color weakness (green and yellow).1. Full colour blindnessCone cell dysfunction is complete, and the opposite of night blindness (rod cell dysfunction), especially dark, fear of light, the performance of diurnal blindness. Colorful world in its eyes is a gray, as black and white TV, there is only light and dark, and no color difference. And see red darkening, blue light, in addition to poor vision, amblyopia, it is the most rare ocular dizziness, dizziness and other symptoms.2. Red BlindAlso known as primary color blindness. Patients are mainly unable to distinguish between red and dark green, blue and purplish red and purple. Green is often seen as yellow, purple as blue, green and blue mixed with white. An elderly man once bought a grey cardigan, put on it and was mocked. It turned out that he was a red blind patient, and the red driver had mistakenly read the train signal.3. Green blindnessAlso known as secondary color blindness, patients can not distinguish between light green and dark red, purple and turquoise, purple and gray, green as gray or dark black. An art class on a very good drawing of the children, always painted green sun, tree crown, grass painted brown, it turned out that he is green blind patients.4. BLUE AND YELLOW BLINDAlso known as the third color blindness. Patients with blue-yellow confusion, red, green discernible, less common.5. Total Color WeaknessAlso known as red, green, blue, and yellow are weak. Color vision disorders are less severe than panchromatic blindness, with no visual abnormalities and no other complications of panchromatic blindness. They can be distinguished when the object is dark and bright; they can be difficult to distinguish when the color is light and unsaturated. Patients are also rare.6. Partial Color WeaknessThere are red weak (the first color weak), green weak (the second color weak) and blue and yellow weak (the third color weak) and so on, in which red and green weak, red and green patients with poor sensitivity, poor lighting, its ability to distinguish color close to the red-green blind; but the material color depth, bright and good lighting, its ability to distinguish color close to normal.